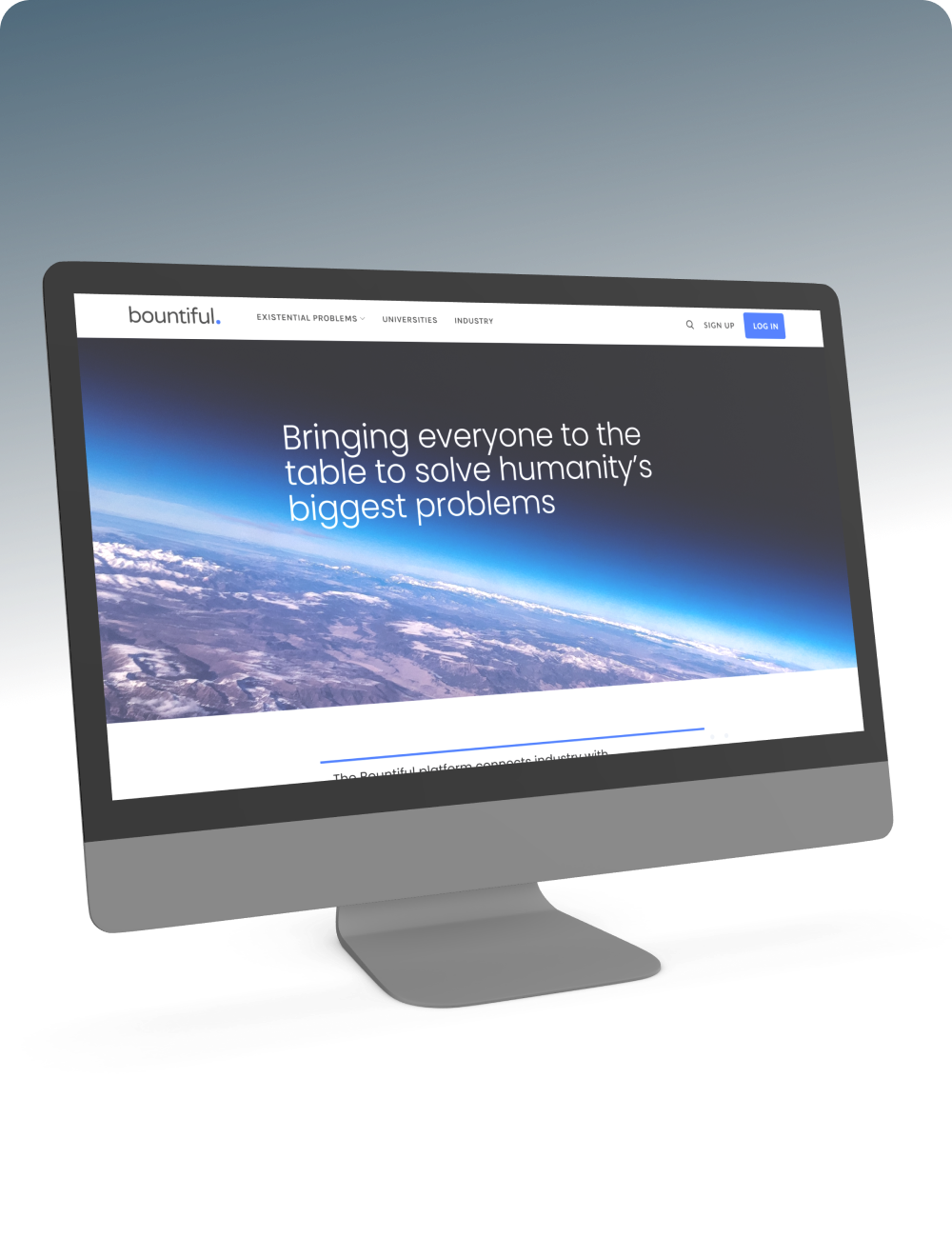 Bountiful: Discovering the Path to Pivot

Bountiful is a pre-seed startup focused on accelerating the commercialization of sustainable technologies. They do this through a platform that connects everyone in the ecosystem of nascent tech, from university researchers and faculty to entrepreneurs and industry. For 6 weeks I was on a team of UX Researchers and Designers with the goal of ideating and prototyping tools for connection on the beta platform. What we soon uncovered was a misunderstanding of customer goals that impacted customer adoption. By taking a step back and getting to the heart of the problem Bountiful was trying to solve, we were able to target the moments of greatest impact and suggest a new approach. We were validated by the fact that the discoveries we made in four weeks were the conclusions the co-founders were beginning to come to after a year. Here’s our journey, and my role in the process.

I worked with four designers on this project who had a range of expertise from research to UI. It was the first time any of us had worked together, yet we hit it off well from the start and self-organized to design to each of our strengths. For me, that was documenting the commercialization of tech that Bountiful was hoping to accelerate. We met virtually each week along with our project manager to set goals and share our findings. At first, our goal was fairly simple.

The beta version of the platform was a week away from launch and in the final stages of development. We conducted an heuristic analysis using as many devices and browsers as possible. Could new users on the platform easily create an account? Could they understand what the platform was about and how to navigate? Was there consistency in patterns and CTAs? Our suggestions were prioritized by severity (unable to create an account while using auto-fill being highest priority).

This was also my introduction to the platform. Version 1.0 centered around university researchers. They were to create accounts and collaborate with other researchers to solve problem statements for tech in exchange for pay. This way innovative research could interact directly with industry, thereby solving real world problems. Bountiful was trying to bridge this gap because they saw that current research was largely inaccessible to industry and entrepreneurs. Very little of it was making it to market and often was left sitting idle on university shelves. How could it make a meaningful impact? 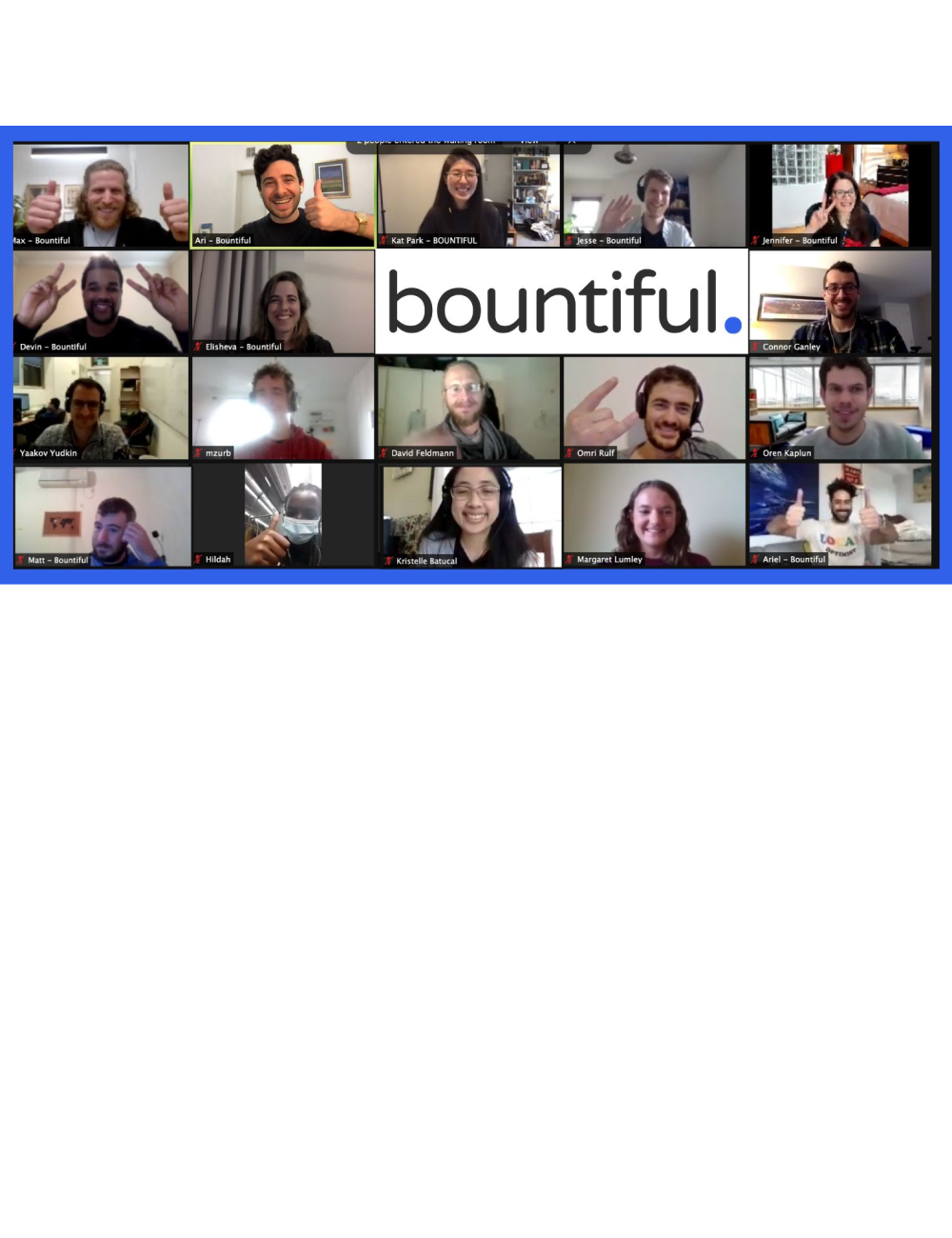 The launch event was widely attended by Bountiful’s target users: university PhD and grad students in the hard sciences. By sitting in on breakout sessions the team and I were able to better understand the goals and pains of this customer segment. We learned that they wanted to find meaningful work that had an impact. They wanted to know about the entire ecosystem that they were heading into: who were the major companies involved and what research was currently being done? We also heard their hesitations.

“How will my intellectual property be protected once I post it to the platform?”

“There’s too much noise in the world, and I don’t have time for another LinkedIn.”

The event was followed up with a qualitative survey where we uncovered more concerns, understood researcher’s current ways of collaborating, and heard that many researchers weren’t really interested in commercialization. For many in academia, research is done for the sake of research.

Coming off of the launch, we weren’t sure if blindly pushing forward and building a tool for collaboration would have impacted user adoption at all. It could have just affirmed our customer’s hesitation by adding to the noise. We needed to dive deeper into each customer segment and get a better understanding of the whole journey of tech from labs to market. 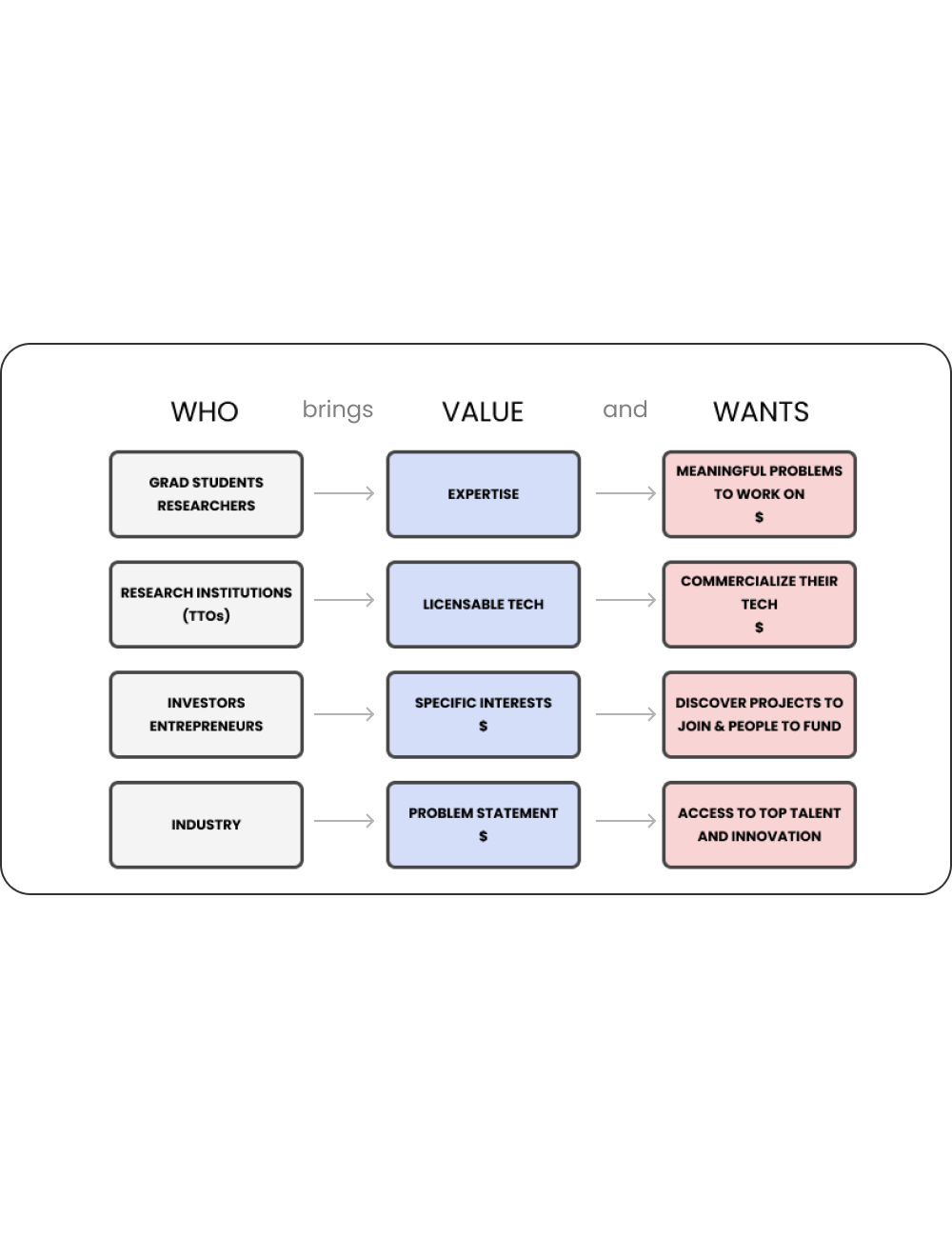 At this point we all branched out to tackle research. I sat down with the co-founders to discover what the highest priority goals for the platform were, as well as who it was serving and how it served them.

Max and Ari are extremely passionate about the process of getting research out of the lab and into the world for the sake of accelerating sustainable technologies.

Success for Bountiful is the commercialization of tech. And because Bountiful simply facilitates connection like AngelList or Facebook, value for each user needs to come from other users. This was key. What would keep each user coming back, or what value did each user offer to others?

I created a simple chart mapping out each customer segment, what value they brought to the platform, and what they were hoping to get out of connection. Very simply, entrepreneurs and industry brought money to the table, while researchers and universities could be enticed by money in exchange for their research. 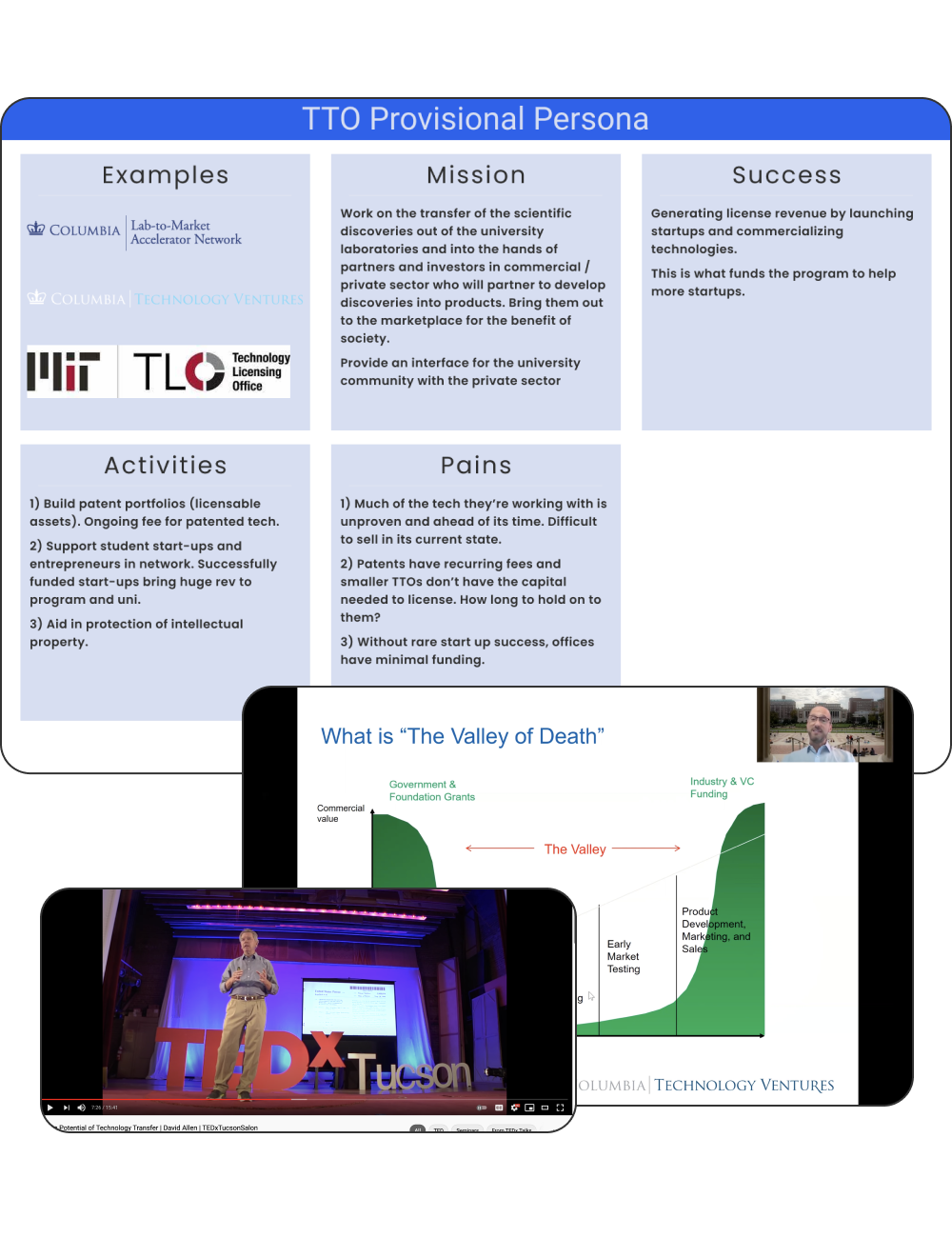 The whole team created provisional personas for each customer segment, and I chose Technology Transfer Offices (TTOs). Each university has a TTO, and one of their many missions is to work on the transfer of scientific discoveries out of university labs. While TTOs are a customer segment of Bountiful, they weren’t integral to the current platform. I saw a major alignment in the goals of TTOs with Bountiful, and I also saw a financial incentive for TTOs to want to be on Bountiful—connecting with industries would allow them to better market their patents.

Columbia University has an extremely successful TTO, to whom I looked for resources that could help me understand the office. Bountiful had a podcast with a director there, I found a helpful TED talk, as well as a lecture that aided my understanding of the goals and pains of TTOs. Others on the team conducted a few interviews with these offices and created empathy maps of their findings. 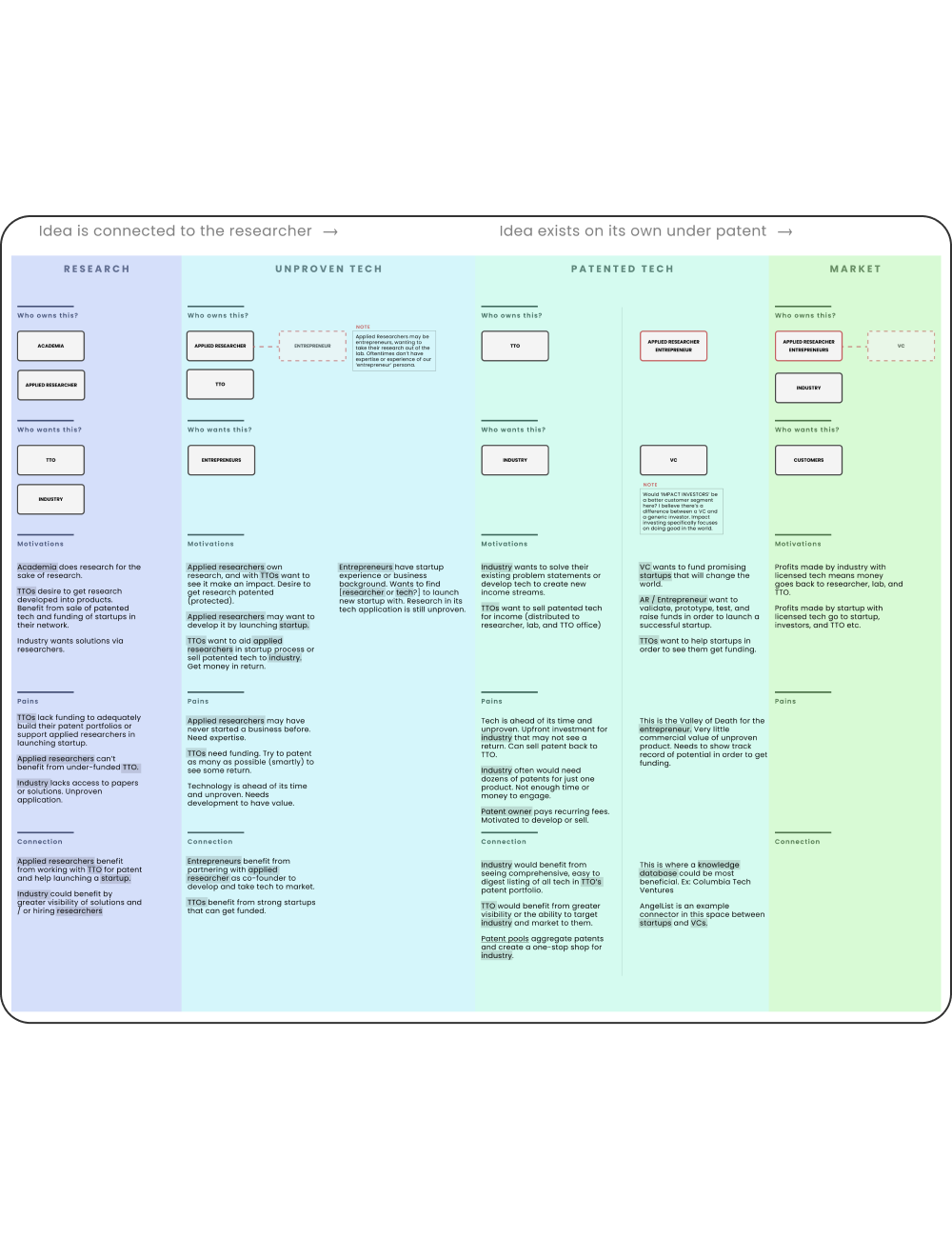 Based on the team’s provisional personas for each of the five customer segments, I created a tech journey map. I found that as technology moves out of the lab, different customers are interested in it at different stages. More than what value does each customer bring to the platform, I needed to know what value they each brought at which stage.

I divided the tech journey into four stages: Research, Unproven Tech, Proven Tech (either patented by a university or being developed by a start up), and Market. In each stage, I looked at which customer segments were involved, what they brought to the table or were looking for, what each of their motivations and pains were, and opportunities for connection. This last piece of connection was key for Bountiful because like AngelList, they succeed when their users connect and exchange value. 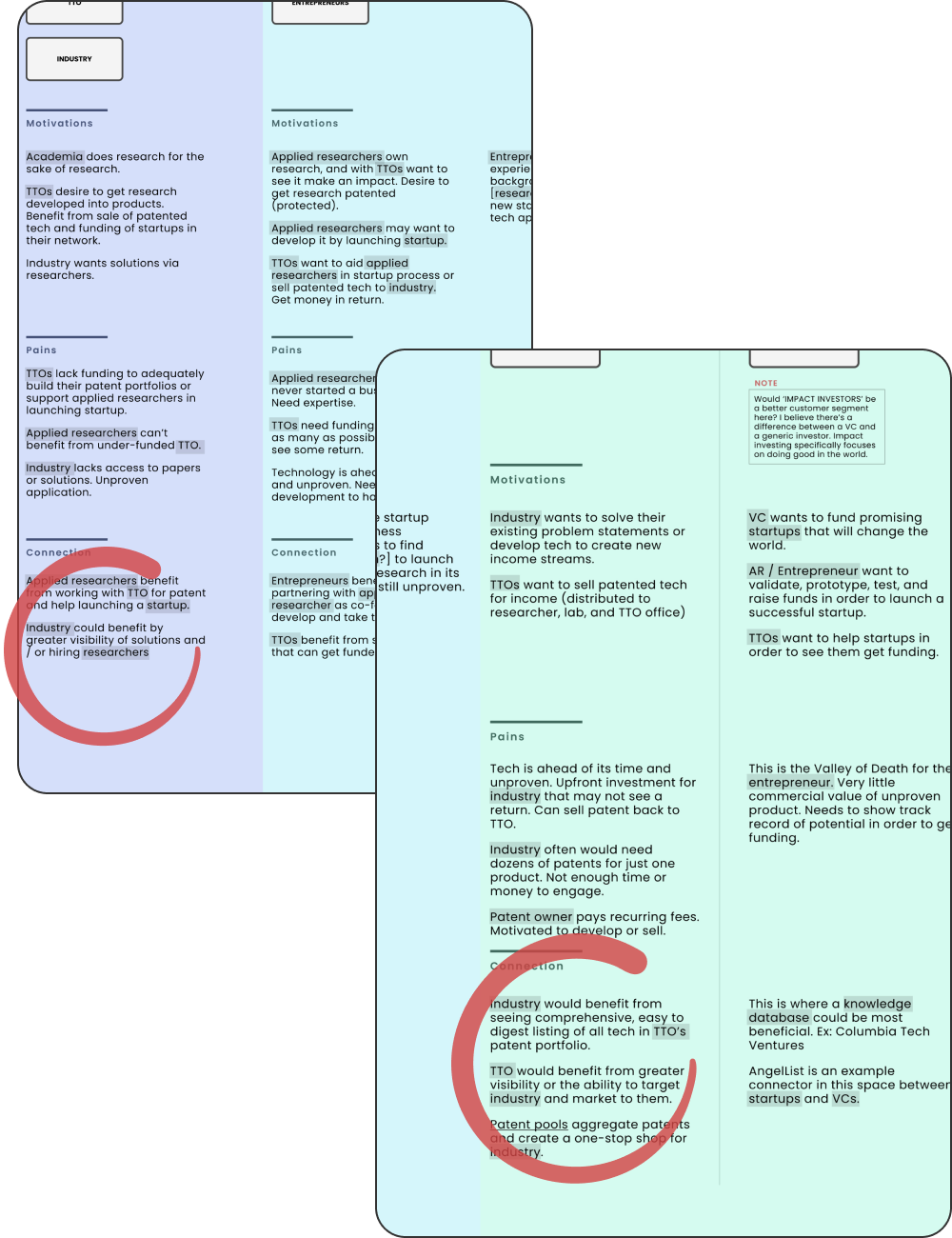 Another clarifying fact I learned from TTOs is this: there are two methods by which tech currently makes it to market:

Therefore, Bountiful wants to accelerate these two events. While entrepreneurial accelerator programs are thriving, I decided that there would be a scalable opportunity for Bountiful’s platform 2.0 to focus on the process of tech being licensed by the school and then sold to industry.

Here are two moments of the lab to market journey where that could happen:

Both of these moments were opportunities for Bountiful to encourage connection, thereby accelerating the commercialization of tech. 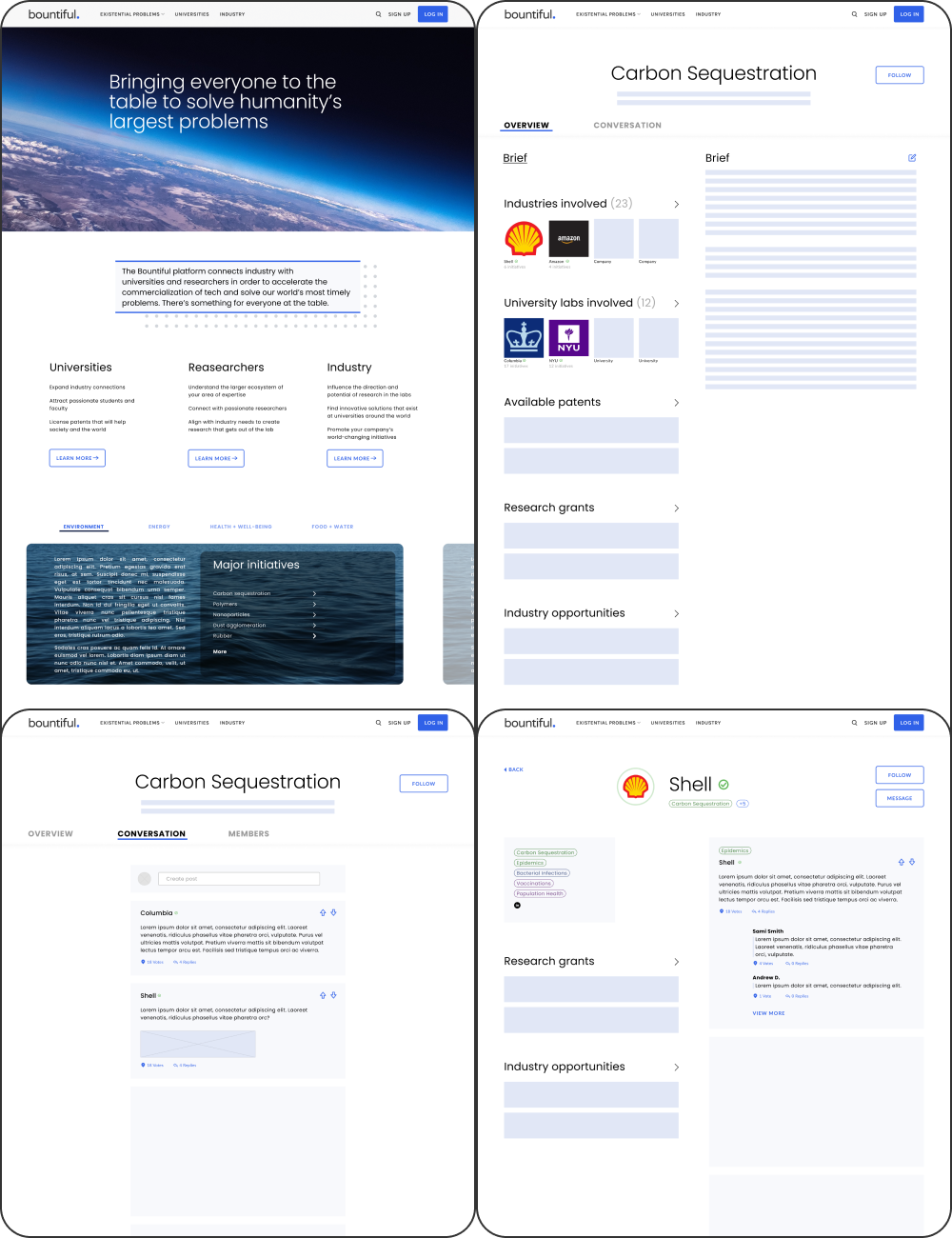 And so I had made it full circle. The team had dug deep to understand the pains of each user segment, and I had stitched together a map of the tech journey and located which customers would want to connect and what value they would be looking for. The question still remained: how would these users connect?

But now the who and why of connection looked drastically different, and I was excited at the potential.

With only a few days to go before pitching our research findings to Max and Ari, the team split off again to ideate wireframes. My landing page lists clearly who the platform is for and what value they could expect from it. It brings Max and Ari’s desire for sustainable tech back into the picture by outlining a clear WHY: we’re all here to solve humanity’s biggest problems, and then organizes each scientific initiative by the larger problem it’s working toward solving.

Thinking about information architecture in this way allowed me to gather together users with like interests in the same space. The platform now centered around universities and industry being able to have open dialogue on initiatives like carbon sequestration or nanoparticles, and these conversations and the wealth of subject knowledge would also appeal to researchers who were trying to understand the whole ecosystem of their area of expertise. The direct interaction of universities and industry through conversation, grant listings, and patent listings, would accelerate the commercialization of tech. 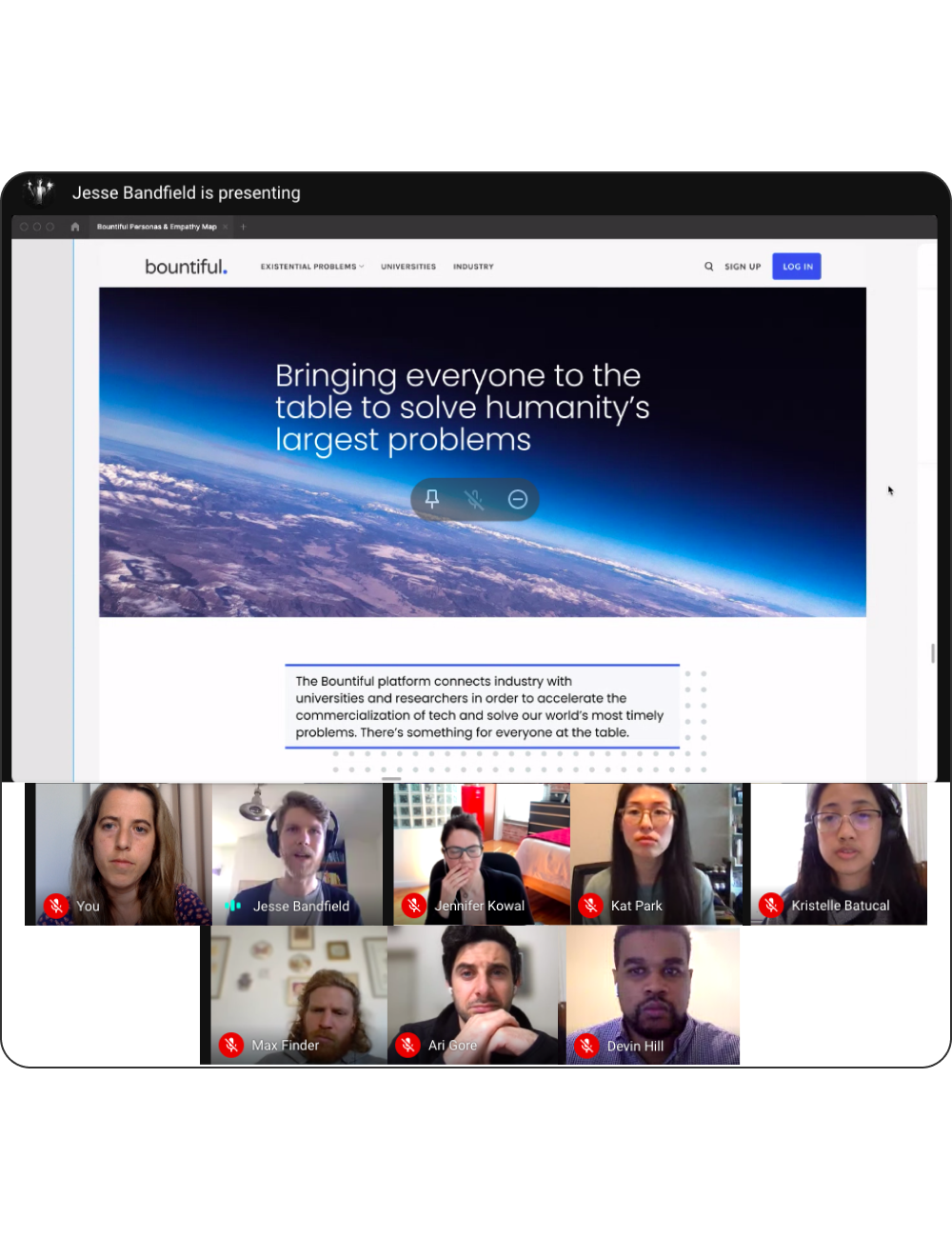 The team pitched our research and ideation to Max and Ari and were immediately validated. They told us that they were speaking with an investor recently who instructed them to look deeper into the process of TTOs—research that we had conducted autonomously. They also let us know they were beginning to realize some of the same findings about researchers being hesitant about using the platform. It had taken them a year to come to these findings, whereas we had been doing research for only 4 weeks.

The project was an incredible opportunity to see the value of design—of quickly digging deep into a complex space, understanding the underlying problems, and ideating a range of solutions. Each of our ideations ranged from minor tweaks to their current platform to better suit researchers, to recommending a full pivot. We were able to explore our original question of how collaboration could work, and also uncover valuable opportunities for Bountiful along the way. 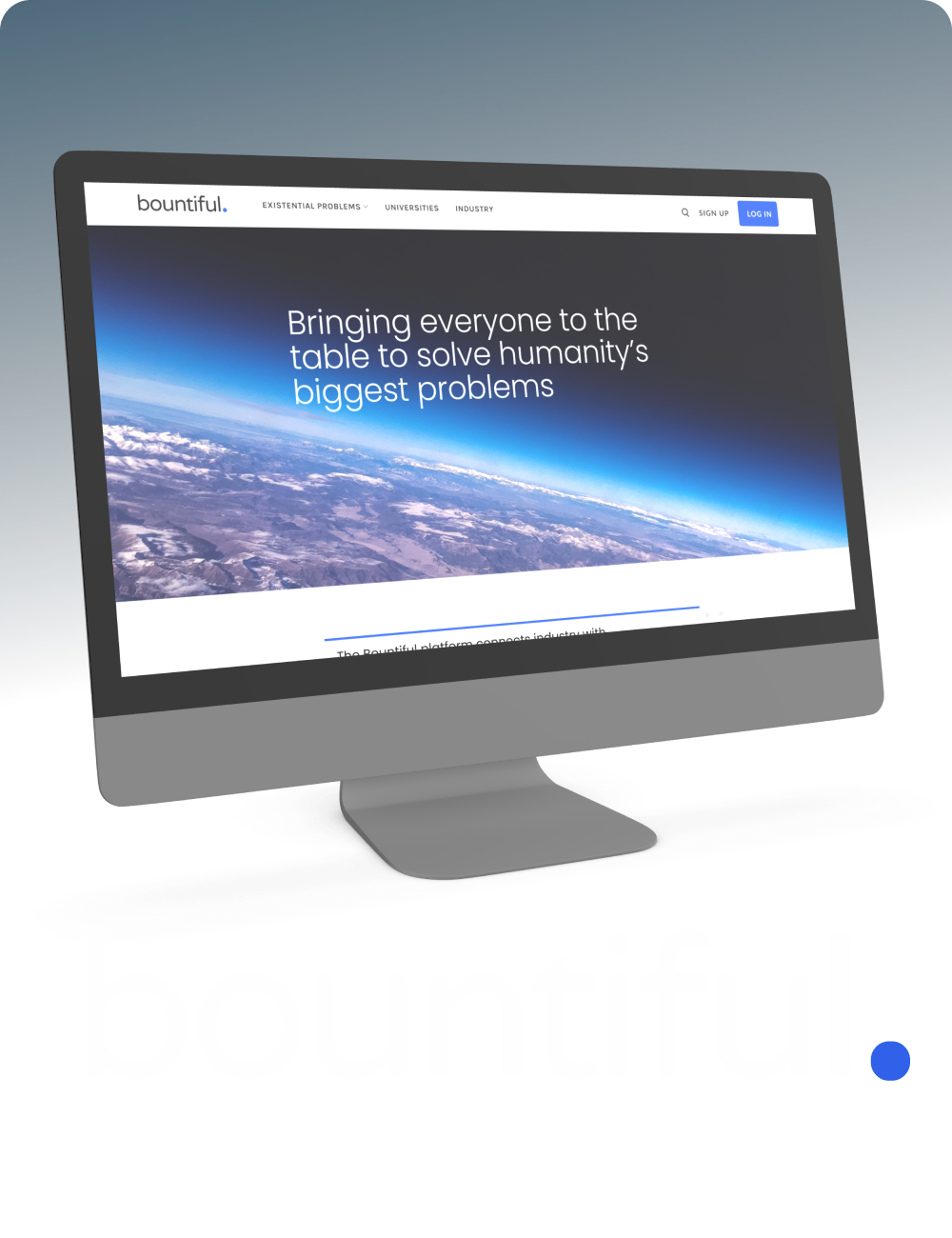 When in doubt, learn.
As a team, we weren’t always clear on which direction to take. By diving into provisional personas, opportunities of further exploration presented themselves.

Explore your hunch.
We only uncovered opportunities by driving off-road. While we were limited by time, following a hunch wherever it led was more beneficial than sticking to a script.